Almost all jet skis have sponsons, but most people don’t know what they do. Sponsons play an essential role in improving the performance of personal watercraft. Here, we discuss what exactly sponsons are and what they do on a jet ski.

Sponsons are a vital safety feature on jet skis. They are blades that stick out from the side of a jet ski, improving its balance and stability. Sponsons prevent riders from losing control when riding at high speeds and cornering. They also make the ride feel smoother by adding more lift.

Sponsons come in a wide range of designs. New jet skis come factory-fitted with them, but there is a big market for custom aftermarket sponsons. Depending on their size, shape, and where they are fitted, they affect a jet ski’s performance differently. If you are serious about riding or want to gain a competitive advantage when racing, custom sponsons are essential!

What Are Sponsons On A Jet Ski?

Along the rear sides of jet skis, two blades are bolted onto the hull lengthways. They stick out from the edge of a jet ski. These are called sponsons.

These can also be molded parts that look like they belong on the hull from the factory.

Sponsons are usually made from metal or hard plastic, and they are bolted onto the underside of a jet ski’s hull. They vary in length and shape. Some are shorter than a foot, while others are over 3 feet long.

Nowadays, jet skis all have factory-fitted sponsons, but there is a huge market for custom aftermarket sponsons.

The Purpose Of Sponsons On A Jet Ski

Sponsons have become an essential part of jet ski design. They serve a number of very important purposes.

Sponsons are mainly there to provide a jet ski with extra stability, but they work to improve a jet ski’s performance in several ways:

How Do Sponsons Work On A Jet Ski?

Sponsons on a jet ski work in a very similar way to the keel on a sailboat, skegs on a surfboard, or fins on a wakeboard. They prevent the vessel or board from drifting sideways by providing lateral resistance as they dig into the water.

When you ride a jet ski at high speeds and turn aggressively, the jet ski behaves almost like a motorbike. It leans to one side, so rather than turning on its flat bottom, it turns on its side.

Sponsons work by increasing the drag on the sides of the hull. This significantly improves a jet ski’s traction, preventing it from sliding out to one side. This allows a jet ski to corner more sharply at high speeds.

Not only does this allow a jet ski to go faster, but it also makes handling much easier and safer. Sponsons reduce the amount of surface area in contact with the water when a jet ski accelerates, preventing porpoising.

When you start up a jet ski, the hull sits submerged in the water. As you hit the throttle, the jet ski must first rise to the water’s surface before it can gain speed. Lifting the hull up takes lots of energy.

Sponsons come in many shapes and sizes, especially custom aftermarket sponsons. Their shape, size, and where they are bolted onto the hull impact how a jet ski performs.

There are two basic sponson designs – symmetrical and parabolic.

Symmetrical sponsons look like blocks that are bolted onto the rear sides of the hull. They widen the hull’s footprint at the transom, adding lift and preventing porpoising.

Parabolic sponsons are a newer design, and they have more of a wing shape. These hooked wings channel water displaced outwards by the jet ski backwards, adding extra lift and traction.

What Is Jet Ski Porpoising?

Porpoising is jargon for a very common handling error with jet skis. It occurs when a jet ski accelerates very quickly. The sudden surge of power causes the bow to rise too fast, so the jet ski bucks up and down.

Sponsons work to prevent porpoising by helping to lift the hull out of the water. Another way to avoid porpoising is to shift your weight towards the bow of the jet ski to keep it from rising up suddenly as you hit the throttle.

Older jet skis such as Kawasaki or Yamaha stand up models didn’t originally have sponsons. This allowed you to tap the throttle in a turn and drift sideways. This made it more difficult to turn as you really had to lean into it and can actually be unsafe in emergency situations. 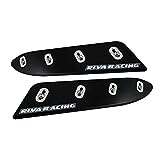 Like many powersports, there are aftermarket parts to replace your sponsons. This can allow you to choose more aggressive, less aggressive, larger, smaller, or other aftermarket sponsons depending on how you want your jet ski to ride, or the situations you will be riding in.

Here is an example of an aftermarket sponson for the Sea Doo Spark. They are adjustable up and down, in and out to provide more aggressive turns when you want your jet ski to corner like it is on rails, or less aggressive if you are just freeriding.

Sponsons are an important safety feature on a jet ski, and they play a key role in improving a jet ski’s performance and handling. Sponsons stabilize a jet ski when it is going at high speeds and cornering. They prevent the jet ski from sliding out sideways and throwing the rider off.

Sponsons enable a jet ski to accelerate from a standing position more smoothly by providing extra lift. They reduce the energy it takes for the craft to reach the water’s surface, improving the jet ski’s gas efficiency. Sponsons also allow jet skis to go faster, and they make the ride feel smoother.