Boats should never be anchored from the stern, they should always be anchored from the bow. The stern of the boat presents the most resistance to the wind and current compared to the streamlined bow, a stern mounted anchor will increase the chance of a boat dragging the anchor or getting swamped by waves.

Dragging at anchor is every boat owner’s nightmare. The movement of a boat dragging at anchor is often so subtle that the people on board cannot sense that the boat is drifting. Boats drifting onto reefs or into other boats is an all too frequent occurrence and one which boat captains must plan to avoid. Let’s look at some ways to mitigate the risk of dragging the anchor.

Our favorite anchor is the box anchor. It is far superior to many other older style anchors on the market especially for pontoon boats! 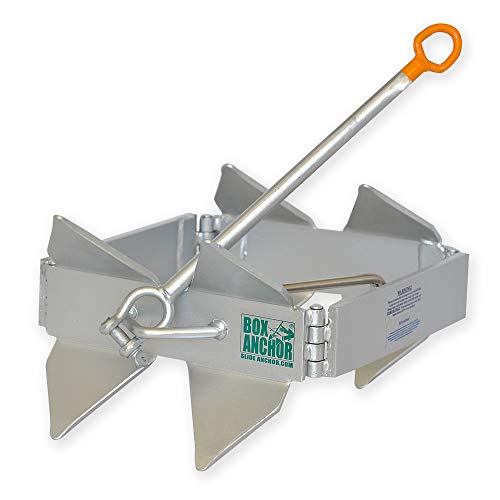 How To Use A Stern Anchor?

Most boats can be fitted with stern anchors, but they are not the primary anchor position. The bow anchor is used to set the boat’s bow facing into the prevailing wind and current. The streamlined bow will present the least force from the wind and the current on the anchor line, making it the most secure anchoring orientation for the boat.

As the wind and wave directions are not always the same, the stern anchor can help orient the boat to take the waves directly on the bow to minimize the side-to-side movement of the hull. Trying to sleep on a boat making waves on the side of the boat is nearly impossible.

The Best Practices For Anchoring Your Boat

The most dominant force will orient the boat on the hull and rigging to find the lowest resistance orientation. When a boat captain is looking for a safe anchorage, the captain must consider the depth of the water, the type of bottom surface, the kind of anchor to use, and the direction of the current during high and low tide.

The captain must also consider the weather forecast for the period during which the boat will be at anchor. The ideal location to anchor would be in a sheltered leeward shore, with the land screening off the wind. The depth of the water and tidal effect needs to be considered next. If you are considering dropping an anchor in a storm, read this first!

How to Anchor your boat

The anchor must be tied to a length of at least ten meters of chain and the anchor rope tied to the other end of the chain. The length of chain and rope let out must be at least five times the depth of the water at high tide. This ratio of anchor rope to depth is critically important. If the ratio is less than five to one, the anchor is at risk of pulling free.

The weight of the chain will cause the anchor to lie in the correct orientation on the ocean floor. With a sufficient length of rope let out, the captain will use the boat’s engine to pull on the anchor rope until the anchor is well set. Many captains will send a diver to check that the anchor is set correctly to minimize the risk of dragging.

Wise captains also plan for the anchor to be set so that the boat will take any waves on the bow of the boat. When the bow faces the waves and the wind, the boat will be most stable and comfortable to be on. It is also very good practice to set an anchor from the stern of the boat to help keep the boat in the correct orientation to the direction of the current and the wind.

The boat’s navigation system can monitor the boat’s orientation and can be set to measure whether the anchor is dragging. As the tides changes every six hours and the wind direction can also change and strengthen in unpredicted ways, the captain has to consider how the boat may be affected and what risks must be managed.

There should always be someone on watch when on passage or at anchor. If the boat does not have sufficient crew to set up a viable watch schedule, then the captain must seek the safety of a harbor or marina to tie up to during the night. Modern global positioning systems can assist the captain or owners in monitoring the movement of the boat.

The stern of a boat is less streamlined than the bow and presents a bigger surface for the wind and current to push against. Anchoring with the stern facing the wind and waves will increase the risk of the anchor coming loose and allowing the boat to drag. Hence the primary anchor is always the bow anchor, and the stern anchor can be deployed to assist the bow anchor.

Boats dragging at anchor is one of the main ways in which boats are lost. Once a boat has dragged onto rocks or a reef and damaged the rudder, very little can be done to save the boat from becoming shipwrecked. The correct anchoring procedure and monitoring of the movement of a boat at anchor are essential to limit the risk of being shipwrecked.